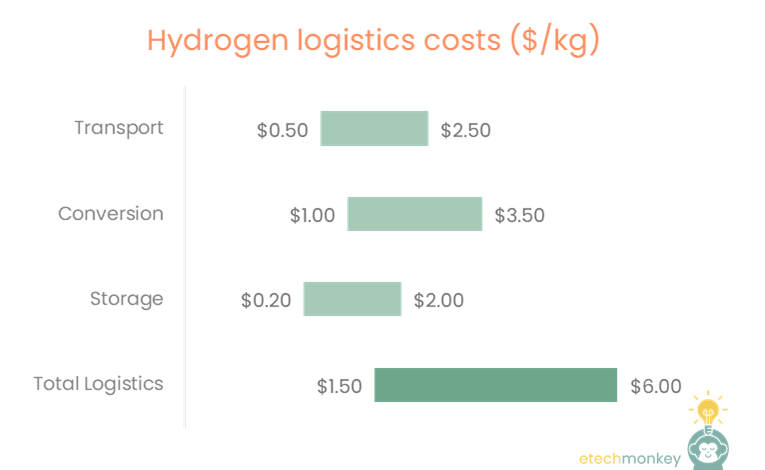 Last time we talked about hydrogen production. I thought it might make sense this week to do a dive into hydrogen transport, storage, and other logistics.

Since there’s a lot that’s not well covered on this subject, I'm dividing this into two parts. In part 1 today, I’m going to explore the current status of this market. Part 2 will lay out new technologies and developments.

The nice thing about the hydrogen logistics industry is that it very much exists today. There is already a functioning model of moving product around safely and at a certain scale.

Most hydrogen today is stored and transported via physical methods, either a) in gaseous form via pipeline and high-pressure vessels or b) in liquid form via cryogenic tanks. Materials-based methods like hydrides or liquid organic carriers also exist, but these are still being commercialized.

I had a hard time finding a breakdown of each storage/transport method (so if anyone has one, would love to see it), but from what I can gather, hydrogen is currently most frequently transported in gas form on tube trailers. Liquid hydrogen transport is limited to large volume, long haul applications where the expense of liquefaction and insulation + the boil off loss of the hydrogen can be covered by the scale and immediacy of the demand (markets usually 150+ km away where a few tons per haul can be used in a short time…space programs are often cited as an example). Pipelines exist but only cover a few hubs (e.g. US Gulf Coast and Northern Europe) and require consistently large amounts of product transported through the same route in order to justify the upfront capex.

Costs vary by technology, distance and amount of hydrogen carried, but typically for distances 500km or less:

Note that the above still doesn’t include the cost of refueling stations if you are looking at the logistics cost for a distributed fueling network. Adding in that cost, which is ~$7/kg, is not exactly straight forward since hydrogen can also be produced on-site at these stations, which eliminates many of the previous logistical costs.

It might also be helpful to think about how these costs break down by method. The below shows what I estimated for total transport, conversion, and storage costs in $/kg for each of gas trucking, liquid trucking, and gas pipeline:

These numbers are imprecise and don't take into account situational differences like the availability and accessibility of equipment, lower contract pricing, regional variations in power costs, consumer preference, etc. My understanding is that right now, gas, liquid, and pipe are all used across the matrix despite the price differences shown here.

I also tried to figure out exactly how much hydrogen is stored and transported today.

This is very difficult to find, unlike the widely reported 70 MT number that represents hydrogen produced. I guess the reason why this estimate is so obscure (other than the fact that maybe people don’t care enough about the logistics of hydrogen as much as the production of it) is that most of the hydrogen today is transported and stored by largely same the few giants that are producing the hydrogen. Since the hydrogen is moving around a few internal company ecosystems, perhaps there hasn’t been good data (that’s not proprietary) gathered around this. I’m hoping once there are more third parties in the logistics ecosystem, that will change.

Anyway, the best estimate I could come up with is 4 - 5 Mt. That’s dubiously anchored on several reports that seem to estimate that the hydrogen storage market at ~$14B right now and an assumed cost (loosely based on the above averages) of $3 - 3.75 / kg. That implies that less than 7% of current hydrogen production is stored.

Next time I’ll look into the future of this market. Thanks to the below for offering data points on cost: