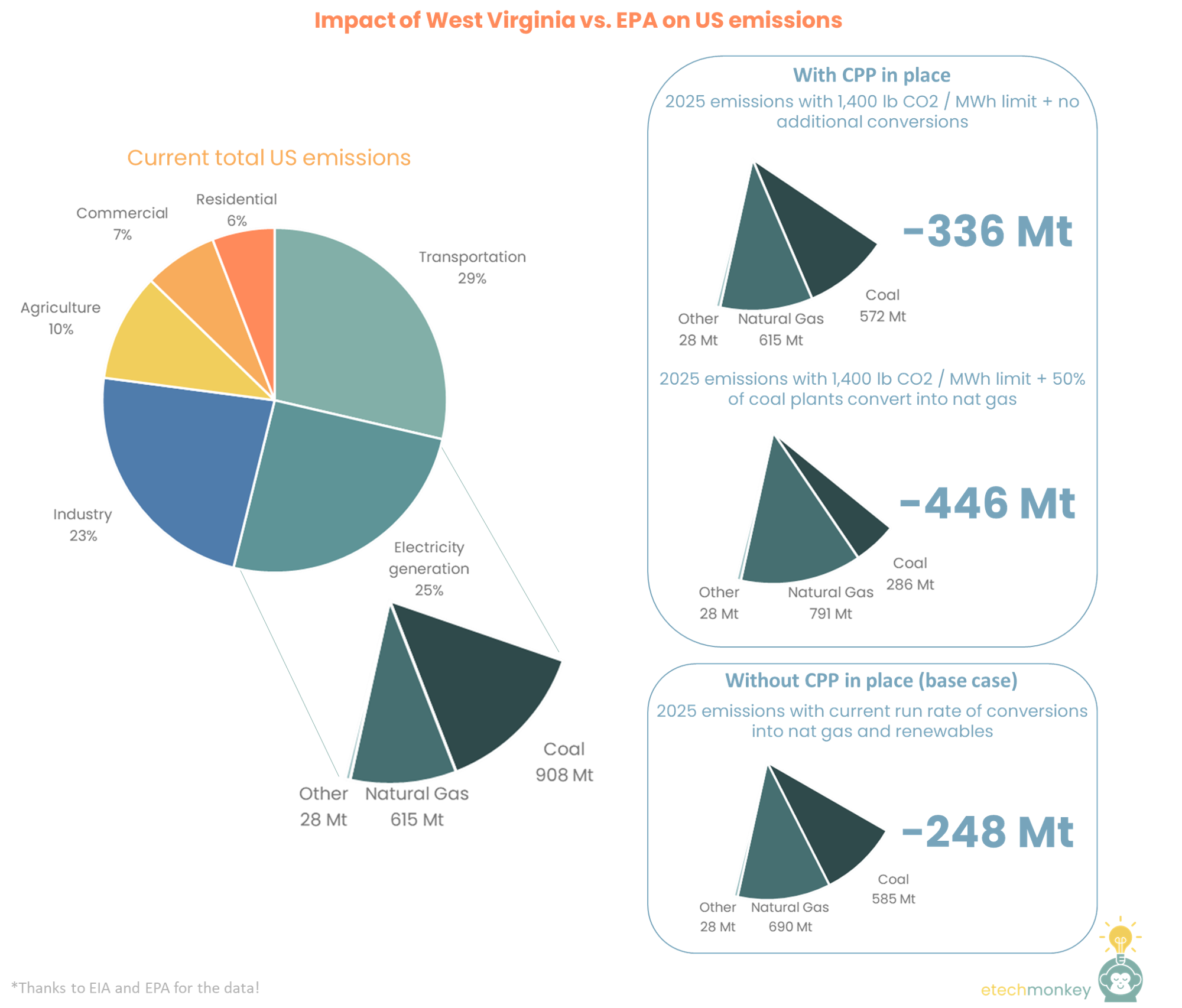 The impact of West Virginia vs. EPA: not great but not terrible

Last Thursday’s SCOTUS decision on West Virginia vs. EPA made waves across the climatetech community in denying the EPA’s authority to set power plant emissions targets using generation shifting and market mechanisms like cap-and-trade. It set a restrictive precedence on the EPA’s ability to accelerate energy transition and removes one of the key regulatory levers that the US has in its emission reduction battle.

I wanted to better understand what the impact of this ruling can be on absolute emissions numbers, power sector participants, and general ecosystem dynamics.

First, to provide some context on the case…West Virginia vs. EPA emerged from West Virginia (and other states) suing the EPA over the Clean Power Plan (CPP). The CPP was issued in 2015 by the Obama administration and was never actually put into action. It was replaced in 2017 by the Trump administration’s Affordable Clean Energy Rule (ACE), which eventually also died. So none of the policies being argued about in this case are actually active in any sort of way.

Nonetheless, the case resurfaced on the Supreme Court docket in October 2021 and SCOTUS decided to grant it for review.

The language under consideration is in Section 111(d) of the Clean Air Act (CAA), the main air quality law for the US and one that gives the EPA administration rights over emissions control. In Section 111(d), the EPA is granted authority to establish a “standard of performance” for emissions sources — aka an emissions limit — using “the degree of emission limitation achievable through the application of the best system of emission reduction.” In non-legalese, that means that the EPA can set emissions limits based on systems they believe an operator can achievably put in place to reduce emissions to that limit.

The ultimate ruling of the court claimed that building blocks 2 and 3 + the potential cap-and-trade system were not clearly systems covered by “best system of emission reduction” in the CAA and that, because of the ambiguity and significance of future generation mix, the major questions doctrine applies. Under the major questions doctrine, the regulatory agency must be given clear authorization by Congress to decide on major issues. Since the EPA has not been given clear authority by Congress, it has no authority to put systems in place to shift generation sources.

My first reaction to this was that the case presents a troubling degree of triviality coupled with just straight misinformation. The court’s argument over the interpretation of “systems of emissions reduction” was anchored by its repeated statement that the EPA had never implemented similar system-wide mechanisms previously. For example:

But there is precedence for EPA establishing external mechanisms as “systems of emissions reduction.” The EPA has several existing emissions trading programs. The one it offered up in response to the court’s criticism is the 2005 Mercury Rule, which the court said was not applicable because “in that regulation, EPA set the emissions limit—the ‘cap’—based on the use of ‘technologies [that could be] installed and operational on a nationwide basis’ in the relevant timeframe.” The court continues to argue, “By contrast, and by design, there are no particular controls a coal plant operator can install and operate to attain the emissions limits established by the Clean Power Plan.”

This seems to be at best, misinformation, and at worst, misdirection. The CPP did incentivize operators to switch emissions sources, but the limits provided were very reasonable. For new coal plants, the limit of 1,400 lbs CO2 / MWh assumed an efficient steam unit with partial carbon capture. For existing coal plants, the CPP did mandate that some level of emissions reduction had to occur but acknowledged that the limits would depend on each individual units’ potential performance vs. the sweeping limit placed on new plants. That means that it was likely that for an existing coal-fired plant, the limit would have been much higher. And even if we do take the 1,400 lbs CO2 / MWh as the limit for existing plants, there is research indicating that equipment upgrades like CCS retrofits or ultra-supercritical steam generators can be cost competitive with generation shifting.

The emissions impact is minimal to modest. As said before, the CPP, or even its less restrictive ACE counterpart, was never put in place, so there is no direct policy impact from SCOTUS’ ruling.

At the current rate of coal-to-nat gas and renewables switching (assumes linear rate of coal retirements and 60/40 switching to nat gas vs. switching to renewables), the US can get power emissions down 248 Mt by 2025 and 681 Mt by 2032, nearly completely switching from coal by the end of the decade. That’s a ~60% decrease from 2005 emissions levels, much more than the 52% that Biden recently announced as a goal for overall US emissions for 2030.

No doubt that the CPP, if implemented now, would accelerate a transition. If we assume that all existing coal plants have an emissions limit of 1,400 lbs CO2 / MWh (an aggressive assumption for the reasons outlined in the last section) vs. the current average of 2,223 lbs CO2 / MWh, emissions from coal would go down 336 Mt in 2021. Additionally, if, as a result of CPP, half of the coal plants in the US decide to switch to nat gas (which has an emissions intensity of 859 lbs CO2 / MWh) instead of retrofit, that impact number goes up to 446 Mt. It takes 3-5 years from announcement to completion for a coal conversion project, so we can take these numbers to be comparable to the 2025 emissions numbers mentioned in the previous base case. Even with a mass wave of retirements that an emissions limit would incentivize, CPP would only reduce 2025 emissions by another 198 Mt and accelerate the complete coal retirement timeline by perhaps 2-4 years.

Bottom line is that even without policy-driven generation switching, the shift is already happening, and adding policy can provide an incremental but modest boost to switching.

Others in the ecosystem will need to step up to the plate. Although there is already a healthy amount of generation switching, what this ruling does is take away EPA’s ability to set up an even more accelerated schedule of switching until Congress gives it explicit authority to do so. This will put pressure on Congress to be more active in putting out legislation that makes this authority clear or specifying the regulations themselves.

The increased difficulty of the EPA to create carbon pricing or additional cap-and-trade programs might also be problematic. Cap-and-trade in the US has had a tumultuous history, with several failed attempts in Congress over the years to establish a program. It’s unlikely if EPA is not given the authority that Congress will be able to pass such a measure in time for it to make a meaningful impact.

There are luckily other ways for the ecosystem to regulate itself. One less tool in the EPA toolbox means one more that needs to come from elsewhere. The three market participants I see that will have a larger responsibility as a result of West Virginia vs. EPA:

All in all, though West Virginia vs. EPA is pointed to as one of the most significant environmental rulings in many years, I feel hopeful that the actual impacts from the decision are minimal. Emissions in the power sector are already organically decreasing because of non-regulatory market forces. Active environmental leadership will still come from the companies that have already made it a priority. And we have a good number of non-regulatory levers that we can pull to incentivize industry-wide movement.  Call me naïve but I have faith that structures we’ve built outside of regulation can continue to keep us afloat.