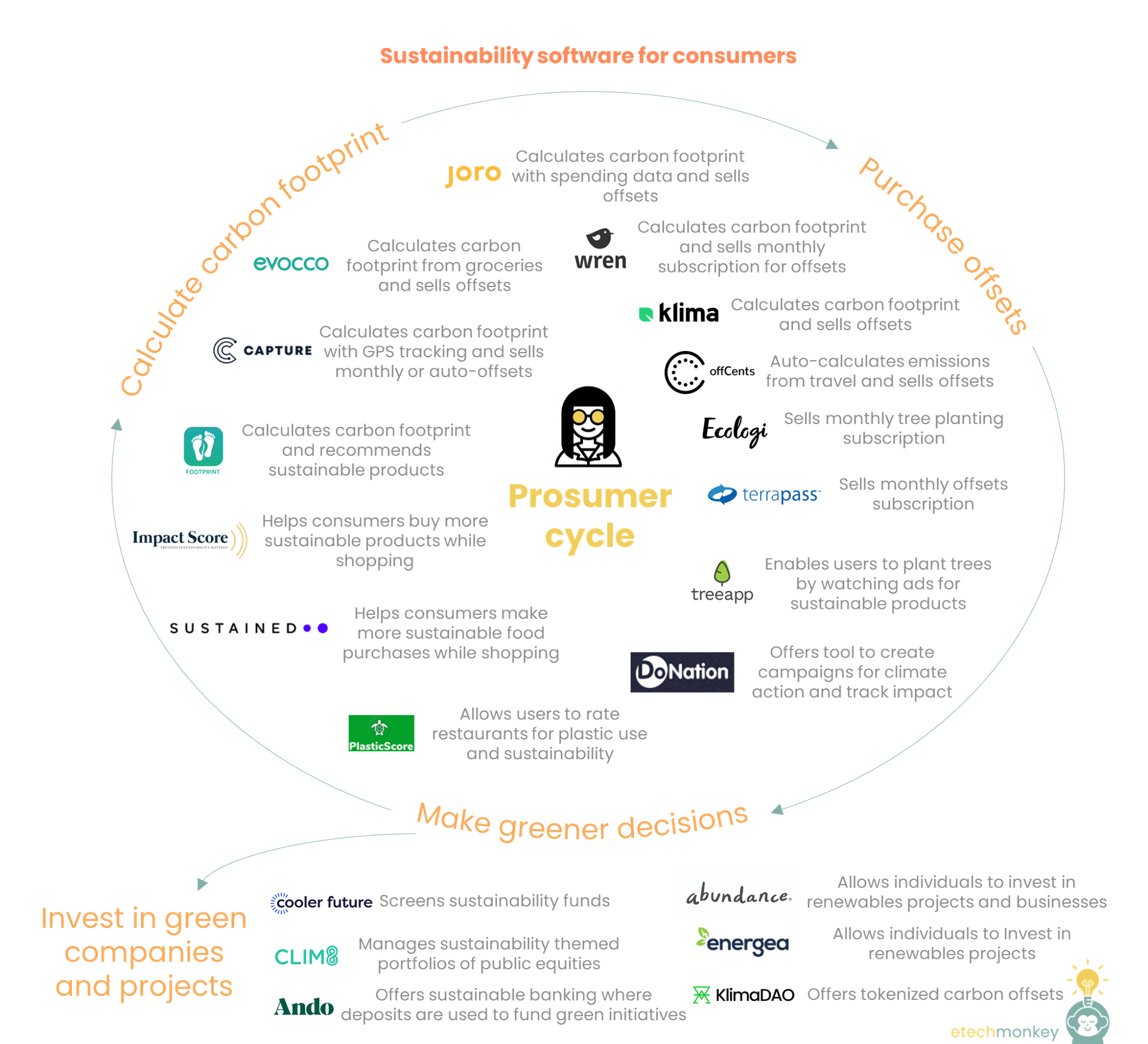 I’ve always believed that for a carbon economy to be whole, consumers need to be part of the market. Consumers drive demand which can structurally shift supply chains towards cleaner, greener sources. By buying things at a green premium, consumers can make non-rational (in the economic sense) choices to push for sustainable products. This can incentive the industrial system that would, outside of what comes from investors, have little to no financial motive to transition.

Of course, the carbon economy can function just fine without consumers. Businesses produce carbon and buy offsets from other businesses and businesses can also pledge to be green for reasons other than consumer involvement (e.g. avoiding climate risk, investor pressure, or just plain wanting to do good). So it’s incorrect to say that consumer involvement is a necessity for energy transition.

But consumers do have power. The rapid proliferation of data, apps, social networking, and online marketplaces has given the consumer an unprecedented amount of optionality in almost every area of consumption. Food, cars, flights, electricity, gadgets…as a consumer, we’re armed to the teeth with choice. And with that choice comes leverage.

The other side of it is that consumerism has led to a substantial increase in emissions. The emissions gap between the wealthy and poor is well documented, with the richest 16% of the world having more than 7x per capita emissions as the poorest 50%. Even a wealthy microcosm like the US clearly shows this gap. Many of the same countries with the highest household final consumption expenditure (HFCE), a marker for consumer spending, appear at the top of the list for emissions per capita as well (most of the exceptions being those countries that are net exporters of industrial products, which ends up counting against them on the emissions front despite their low consumption).

If we can engage consumers in emissions monitoring and reduction, maybe we can redirect that consumerism to more sustainable sinks, which can have big impacts. If the US lowered its average per capita emissions to where Japan’s level is right now, we can reduce our emissions by 43%, or almost equivalent to Biden’s 2030 goal.

Anyway, I’ve justified this post enough! The point is that the consumer side of the carbon economy is worth engaging. It can be the dark horse in the race to net zero. There are already software tools in the market for the emerging “prosumer” – or the proactive consumer – to use in leading a more sustainable life. These software tools target four main functions, with the first three part of what I call the prosumer cycle.

Outside of the prosumer cycle is how the consumer can support the climatetech ecosystem through investing choices. Many different companies are working to bring the consumer into green companies and projects. Just a few of them here:

A big obstacle for these consumer apps is getting consumers to actually understand how to use these correctly. It’s not as natural to use a carbon footprinting app as it is a budgeting app or a social media app. I suspect that even the more popular apps on this list struggle to get the scale they need on the consumer-side…and I suspect that’s why many of these footprinting apps have developed enterprise products as well.

It'll be interesting to see what drives adoption of consumer sustainability software since there isn’t really “ESG pressure from stakeholders” for consumers as there is for companies…yet. The “stakeholders” for a consumer include friends/family, coworkers, and lenders (for car, house, etc). Will consumers be held accountable with an ESG score like they are with credit? Or will a peer-led movement drive adoption instead?