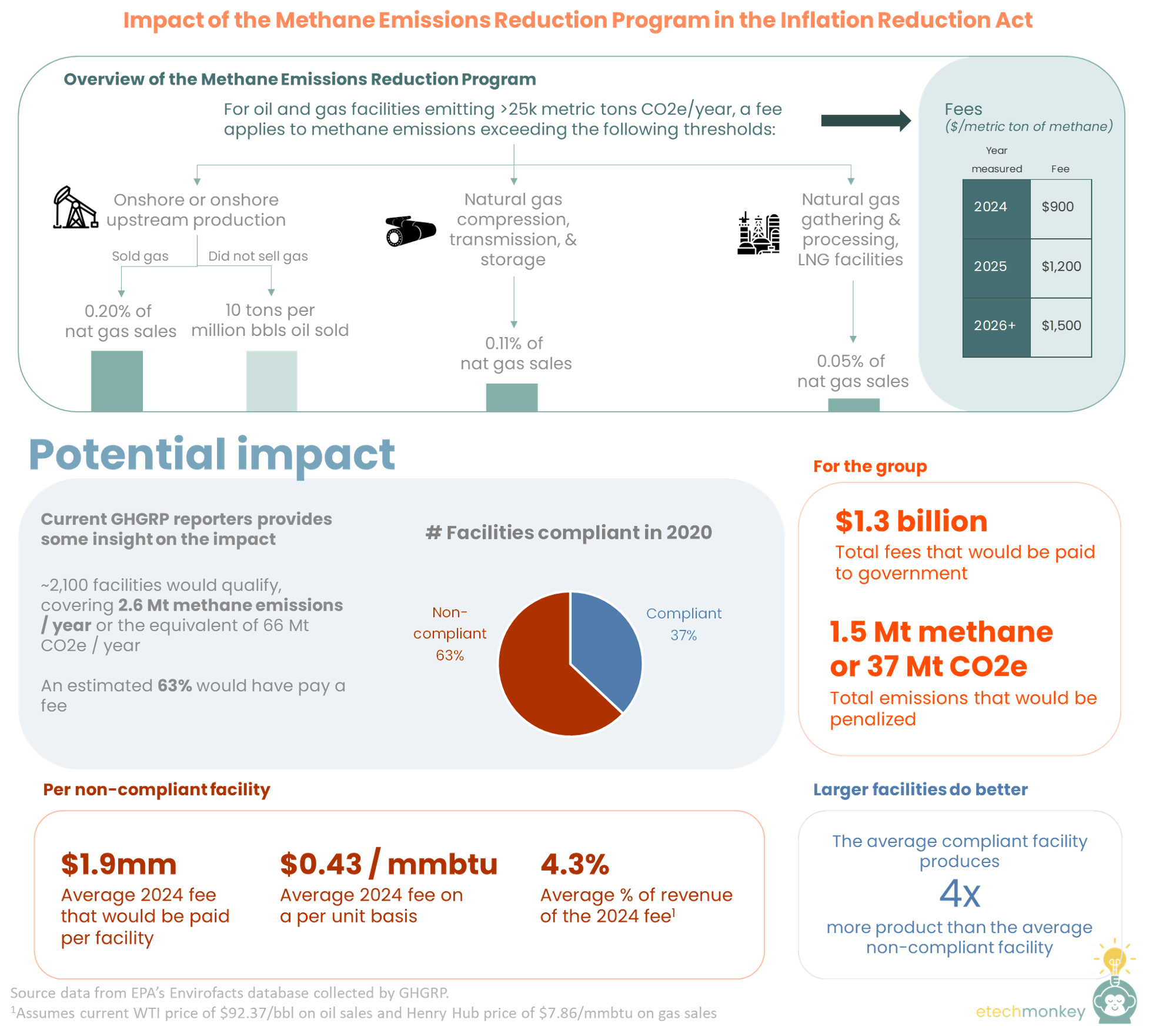 I didn’t focus too much on these sections since how those funds will be deployed out of those agencies is still currently unclear. It’ll take time for these government agencies to figure out their rules for what projects / entities qualify for those funds. And then it’ll be an additional step to figure out how to enforce those rules in a practical way. Until then, the impact of these parts of the legislation are hard to judge.

That being said, Section 60113 is worth discussing.

Section 60113 is a methane tax on the oil and gas industry. It places a methane fee on oil and gas facilities that report >25,000 metric tons of CO2e / year. For whatever emissions exceeds the emissions threshold for that facility, the charge would be:

The emissions thresholds are as follows:

There’s also an exception built in to exclude facilities that that are already regulated by state-level methane emissions requirements, provided that those requirements would result in emissions reduction equal or greater to those that would be imposed by EPA’s proposed rule from last year.

The >25,000 metric tons of CO2e / year is the same threshold used by the EPA to determine eligibility for facility-level GHG reporting, so we actually have an idea of what emissions would be subject to this new tax.

If we impose the methane fee on the facilities that exceeded their thresholds we can see that an estimated 63% of current facilities are currently not compliant. Those facilities represent ~1.5 Mt methane in excess, or the equivalent of 37 Mt CO2e. With the 2024 fee amount, that’s ~$1.3 billion in fees paid to the government.

The numbers are possibly smaller considering the regulatory exception that may allow some facilities to bypass this fee. Facilities in states like Colorado can follow state regulations instead if the emissions reduction would be greater or equal to those imposed by the currently proposed but not active EPA rule. It’s unclear how that emissions impact would compare to this fee.

A non-compliant facility on average would pay $1.9mm for 2024’s emissions measurement. That translates to $0.43 / mmbtu or 4.3% of estimated revenue using today’s prices. Though 4% of revenue is no small change, commodity swings can be much larger for oil and gas facilities. Cost structures often take this potential volatility into account and are sized appropriately to be able to handle them. So at today’s prices, the economic impact should be easy for most operators to handle (9 facilities actually would have the fee take up more than 50% of revenue, but those are large outliers).

That being said, commodities do shift quickly and if pricing drops down close to the breakeven, the extra punch from the methane fee could hurt a lot more (average of 12% at $40 oil and $2.50 gas). So hopefully that itself gives operators enough incentive to take emissions reduction seriously.

So for the operators that have already set goals and are working on their methane intensity numbers, this fee should have low to minimal impact on their efforts.

But looking at the wide distribution of methane intensities across operators, there are many that are egregiously off base. This fee would hopefully help push those laggards to keep up with the rest.

The fee doesn’t apply equally, hitting the smaller facilities harder than larger ones

But beyond what could just be a government database problem is the overarching issue with GHGRP emissions accounting. There are more and more studies that point to GHGRP under-reporting for all sorts of reasons - industry non-compliance, bad methodologies, and reporting thresholds that exclude the majority of emissions. That's an issue not only for determining the fees in a rule like this but also for eligibility for GHGRP in the first place. Though GHGRP does put in place some verification procedures and requires operators to document all emissions reporting, there are still plenty of ways an operator can bypass the system, deliberate or not. Once there’s a real monetary incentive to do so, I suspect that under-reporting may be even more prevalent.

The way to counter this is with technology. With better methane monitoring technology will come higher standards for reporting. That will in turn allow EPA to not only verify the emissions numbers more easily but also allow operators better manage their own footprints in real time.

TLDR; the methane fee is more of a gentle push vs. a kick in the butt. It likely won't have a big emissions impact, but it will play an important role of pushing industry laggards to catch up with industry leaders that are already setting similar methane intensity targets. Plus it generates an extra $1B for the government.