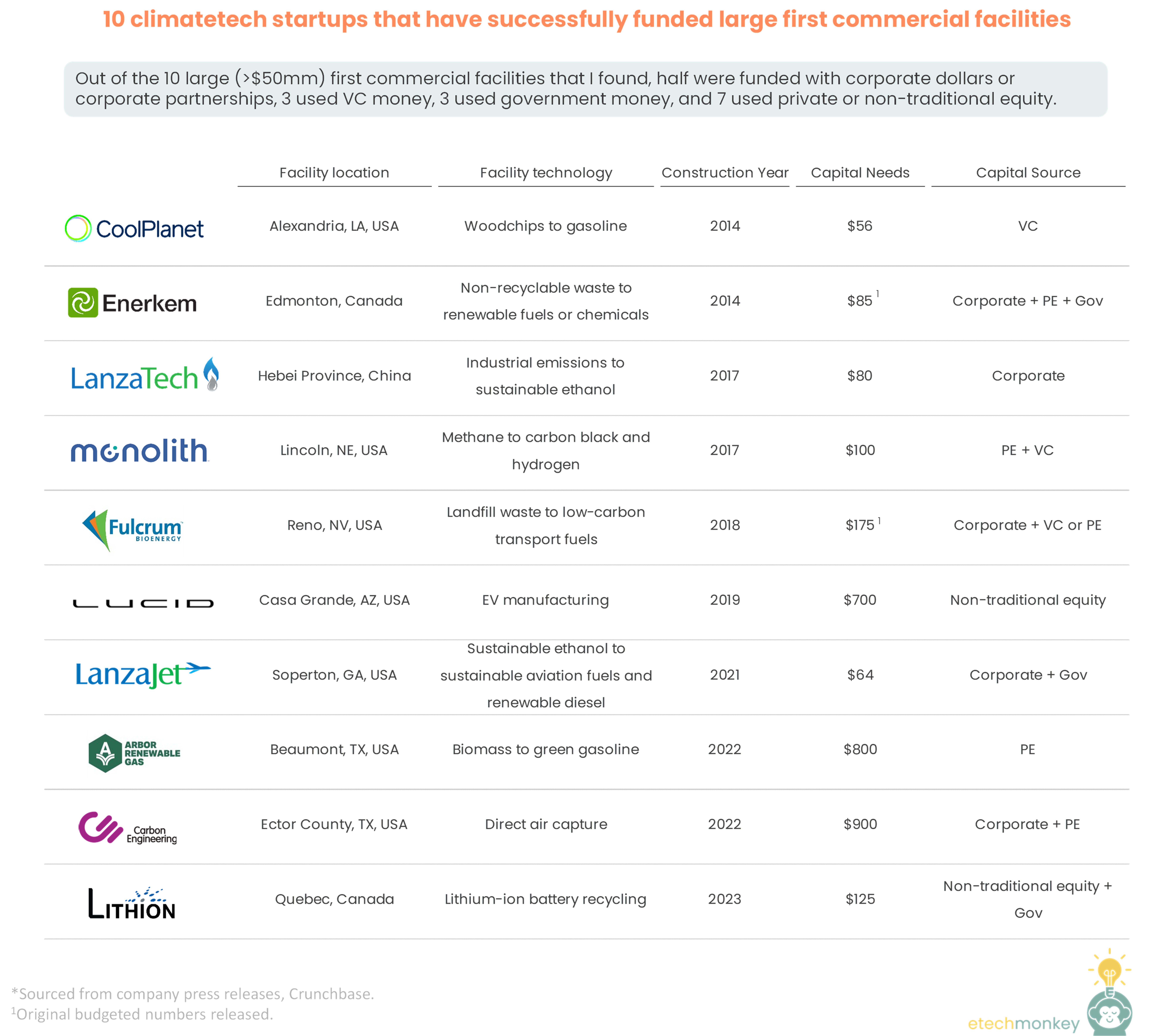 Looking at 10 different first commercial facilities & how they got funded

The scaling problem in hard asset climatetech is well-known and well-documented…valleys of death, unfit capital, project development challenges, etc. etc. Technologies that require some kind of plant, facility, or large chunky infrastructure to be built struggle the most with scaling. Here's how the ease of funding curve looks across a company's maturity (thanks, Lanzatech):

Initial funding for these technologies, if in small dollars, is relatively plentiful. For R&D and prototyping, startups can access grant funding and traditional VC capital (as well as capital from family offices, corporate VCs, incubators & accelerators, and other entities that surround the VC ecosystem).

After the technology has been prototyped and shown to work at lab scale, engineering work can take it to the next level and show that it can be used in the real world. Engineering work can mean expanding the team to include more engineers and/or contracting third parties like EPCs or labs to perform feasibility studies. Larger VC dollars can fund engineering work, though the pool of VCs that can write a later stage check for a pre-commercial tech is more limited than at the earlier stage.

Pilots and first demonstration assets / facilities are where the capital stacks start to detract from the normal VC ecosystem. Funding for pilots and demo facilities can edge into really late stage VC to growth equity levels of capital. Activities like permitting, buying construction materials, hiring a construction agency, adding plant personnel, etc. are expensive. Since the goal of this stage is to make sure the technology works and to prove out the engineering work, the plants are smaller, limited in connectivity to commercial outflows like roads or the grid or customers, and operate only for a fraction of the time. I’ve found that most of the “mature” hard tech climatetech companies with big plants to build are at this stage. This is especially true for the battery industry. Several of the names that have gone public via SPAC over the last few years – Solid Power, Quantumscape, FREYR, SES – are still undergoing pilots.

After the technology has been validated at smaller scale in the real world, both the technology and business model need to be proven together in building the first commercial version of the asset or facility. As we reach the trough of the growth curve, this is the hardest step to get funding for but the one that derisks the company the most. Building a commercial plant requires the capital of a pilot or demo facility scaled up to the point where the economics make sense + capital for additional personnel to run the plant or asset full time + capital for processes or certifications to enable the product to be sold commercially + capital for logistical infrastructure like trucks, roads, pipes, or other conveyances + capital for contingencies, unplanned downtime, regular maintenance….the list goes on. This step attracts investors looking for cash flow, which means that the technology has to be derisked, the financial model has to be airtight, and there has to be a high degree of certainty that revenue will occur.

Post-first commercial, companies can access the much larger pool of capital: private equity, infrastructure capital, and project finance equity and debt. These capital pools don’t have enough climatetech opportunities at their desired maturity levels and check sizes. A startup that reaches this stage usually has enough leverage to get pretty advantageous economics.

I wanted to better understand how a startup can get past that first commercial trough – are there any learnings that we can glean from past projects? To do this, I set out to collect examples of large commercial facilities (requiring >$50mm in capital) that have been funded climatetech.

Unfortunately, they were very difficult to find. My ideal dataset would be 30+…but I could only find 10.