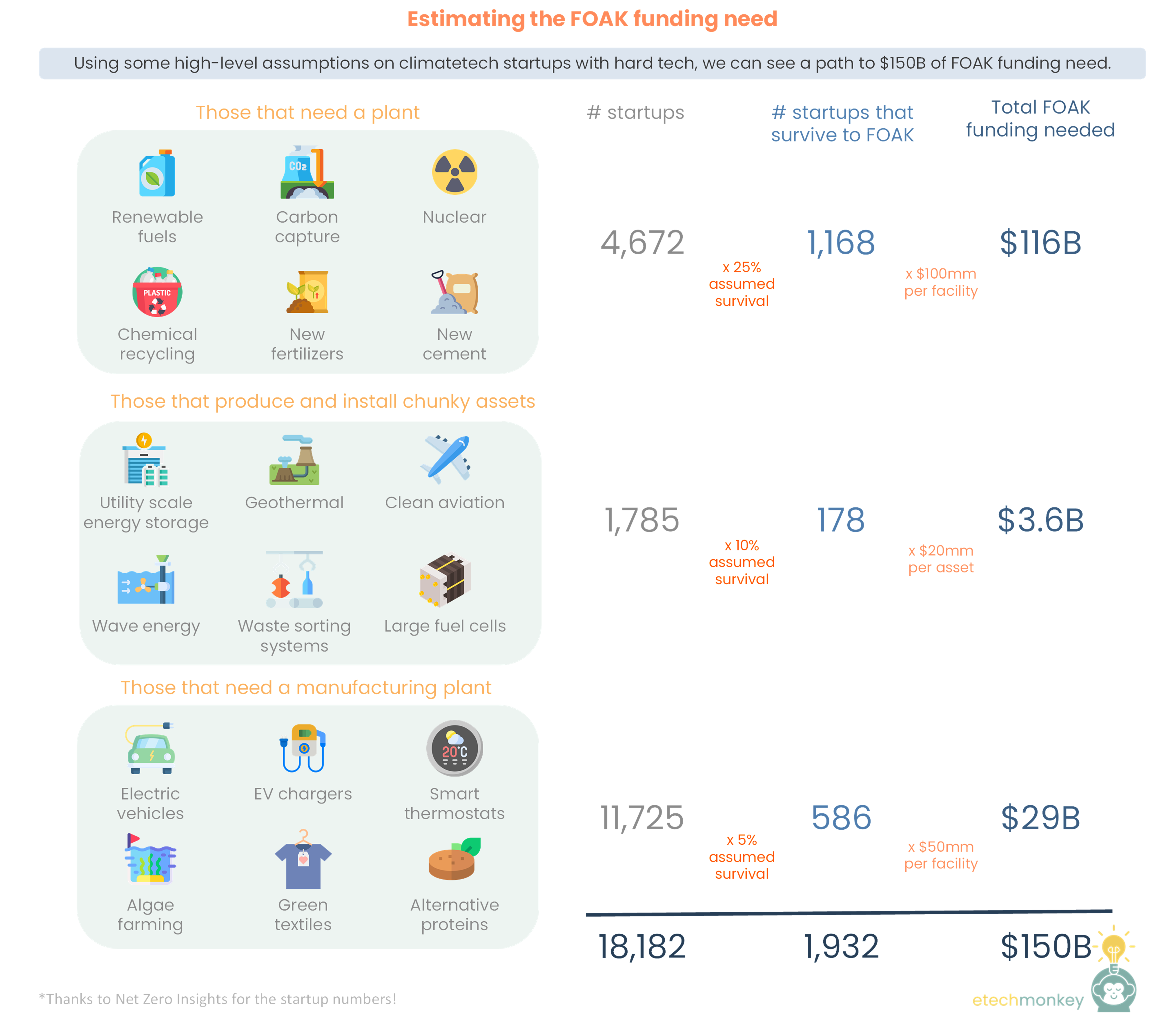 How much FOAK funding do we need?

After discussing types of FOAK last week, this week I wanted to see if I could find a good estimate for the amount of FOAK funding we need.

One way to look at this is to try to pare down estimated infrastructure spend to what will be spent on FOAK technologies.

Most infra spend estimates land at ~$4 to $9 trillion / year. These numbers are never detailed enough to understand specific technologies they’re actually building in, but we can kind of glean from the breakouts an upper-end limit for what spend might be:

Another bookend would be looking at solar farms as a comp. There are 2,500 solar farms in the US, 39 years after the first solar farm in California. Let’s assume there’s 4 different types of PV (monocrystalline, polycrystalline, multijunction, and thin film) and that these 2,500 only needed 4 FOAKs (probably a very wrong assumption). If we assume 4 out of every 2,500 facilities requires a FOAK, we’d need $80B for FOAK assets.

So somewhere between $80B - $500B is probably the right number here…

To put this into context, PE funding in cleantech is at around $20 – 25B / year, while late stage VC funding is at ~$24B / year. If all of this funding was directed towards FOAK, we’d have enough…but part of this funding is used for digital technologies and for stages other than FOAK. If we assume that we have to put all of the FOAK in place by the halfway mark, we only really have $700B in place for potential FOAK funding. At the low end, 11% of our late stage – PE capital should be directed to FOAK. At the high end, 70% of that capital should be directed to FOAK.

I can tell you anecdotally that that true percentage of capital being directed to FOAK is nowhere near 11%, much less 70%.

If you’re not convinced by this top-down method of estimating potential FOAK spend, we can try to do a bottoms-up approach. We can assume that each startup that survives to FOAK needs FOAK funding…so we need an estimate the number of climatetech startups that are out there that will survive to FOAK.

18,182 startups were identified as being in these categories. Let’s assume that 25% of the large plants, 10% of large assets, and 5% of large manufacturing faciltiies make it to FOAK. At $100mm per FOAK, that would mean we need $193B in funding for FOAK with just the startups that exist today. If we attempt to get more granular on individual category funding needs and assume the large plants need an average of $100mm, assets need $20mm, and manufacturing facilities need $50mm, we get $150B. At $150 – 193B of FOAK need, we’d need 21 - 28% of late stage VC + PE capital directed to FOAK, implying that one out of every 4 of these late stage deals need to be funding a FOAK.

I realize that a lot of this exercise is very hand-wavey…but it does at a high level illustrate an important need to direct more funding to FOAK facilities. We either need to be deliberately setting targets for the proportion of institutional deals that are FOAK OR we need to be bringing more capital in the door to help fund FOAK. In that latter case, the government, non-profits, and non-traditional capital sources like family offices and sovereign wealth funds will play an important role.

TLDR; FOAK funding will cost us billions, likely hundreds of billions, of dollars. We need more funding directed to it.