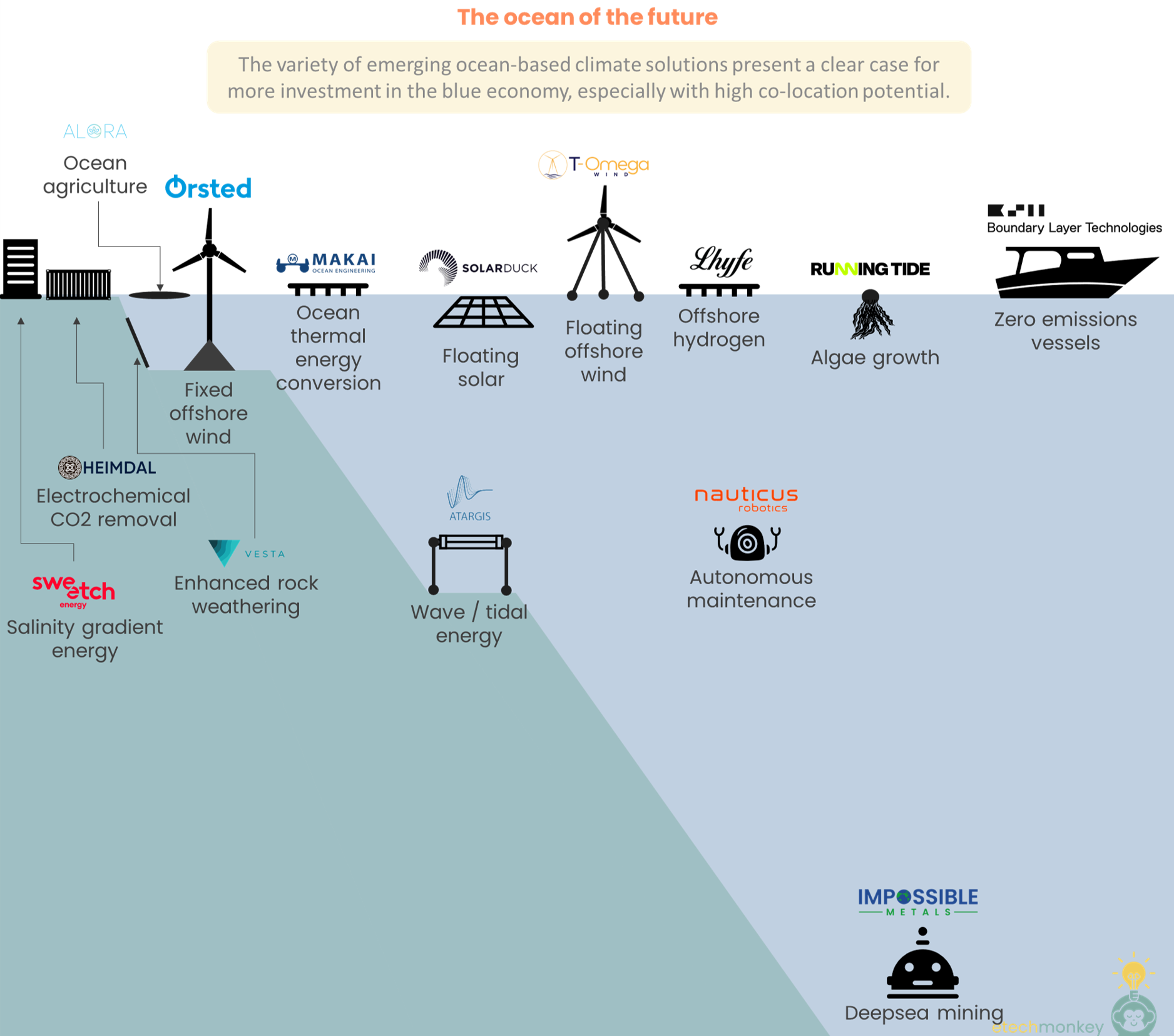 Most of what we talk about in climatetech happens on land – hydrogen production, power generation, carbon sequestration, grid optimization, industrial decarbonization, residential energy efficiency, etc. This is because the majority of technologies get deployed around people’s homes, in city environments, or industrial complexes, all of which largely occur on land.

But what about the ocean?

I became intrigued by the ocean after observing a renaissance of wave energy recently: the DOE announcement on funding for wave energy technologies and a smattering of news for wave energy companies like Atargis, CalWave, Eco Wave, and Mocean.

All of these technologies are in varying stages of development, but most are early stage and require high amounts of capital going forward. Most also face a bevy of challenges being first-of-a-kind in the ocean: long permitting cycles and evolving regulatory requirements, limited testing sites, potential seawater corrosion or storm damage, lack of interconnections, power supply, and other infrastructure, difficult and expensive maintenance, and digital connectivity issues.

Many of these challenges can be tackled with funding, but ocean technologies consistently are deprioritized compared to land-based technologies. Even offshore wind, arguably the golden child for ocean-based technology deployment, is not growing fast enough. Net zero pathways like Princeton’s Net Zero America, BNEF’s Energy Outlook, and John Doerr’s Speed and Scale often build in limited to no allocation for marine solutions outside of offshore wind and ocean protection. Project Drawdown does include additional categories like ocean power, ocean shipping, and improved fisheries, but ranks them all fairly low on the potential impact scale (even offshore wind ranks 38 in a list of 84 ranked solutions, well below its renewables counterparts on land, which take the top 2).

IEA is the only one that seems to give the blue economy some credit. IEA’s ETP list includes 12 different types of overtly (some categories like CO2 storage lump offshore and land-based together) ocean tech and lists the large majority of them as “High” or “Very high” impact (though it’s worth noting that almost 40% of the list of 503 technologies is either “High” or “Very high” impact).

So to summarize, these are early stage technologies that face lots of challenges, require more funding, and are frequently ignored in net zero pathways. What’s the point in putting dollars to work in this area? Why in the world do we need to go through the trouble of funding these ocean-based climate solutions?

Technologies like regenerative / low carbon aquaculture or low carbon shipping are needed to decarbonize industries that we assume will persist in a net zero scenario. So that’s an easy answer.

But for technologies like offshore wind, offshore solar, wave energy, tidal energy, carbon sequestration, seawater and seabed mining, and hydrogen production, there are comparable land-based alternatives that one can argue obviate the need for more complex ocean solutions. A few thoughts on this category:

TLDR; ocean-based climate solutions present a valuable but underappreciated solution set to the world’s climate challenges. The ocean’s plentiful resources, proximity to demand centers, and high co-location potential present a compelling opportunity for both builders and investors in climatetech.